The time in Czech Republic will be 2 hours ahead of the Greenwich Mean Time, i.e., GMT+2h, during the summer school.

The only official language is Czech. Communication in English is generally poor except for banks, exchange and merchants in the city centre. For this reason, we suggest to go to a self-served supermarket Albert, which has broader offer and accepts payment with Euro (EUR), or use a local self-served market Charlie centrum, which is somewhat "oldfashioned" but close to the hotel, when shopping for food.

If you need a person for translating, contact the secretary person.

The Czech currency is the Czech Crown, denoted CZK. The exchange rates are roughly 1 EUR = 25 CZK and 1 USD = 18 CZK, the current rate is here in the top right corner. For the exchange, it is probably the best to use any of the small money changers on the street Masarykova.

The VISA and MasterCard cards are typically accepted in ATMs and shops. You may also pay with Euro (EUR) in some shops. However, the return money will usually be Czech Crowns (CZK).

The prices for goods are comparable to western Europe, sometimes even better. One may get lunch in a regular restaurant (not exactly in the city centre) for less than 200 CZK (8 EUR). A 1.5 liter plastic bottle with plain water costs up to 15 CZK (0.6 EUR).

The public transportation in Brno and surrounds is integrated into the IDS JMK system. However, transportation in the city by means of trams, trolleys and buses is operated by the Dopravní podnik města Brna (Brno City Public Transport, link contains short How to travel guide and Plan of lines in the left menu). Transportation system works with the term tarifní zóny (tariff zones). For traveling within the city, it is always sufficient to buy tickets valid only for two zones.

Typically, you will need a 22 CZK ticket that allows you to use the public transportation in the next 60min from the moment of signing the ticket (the finish time is printed on the ticket by the signing machine), you may change/transfer lines.

The taxi stands in the city centre are in front of the main railway station near the pedestrian crossing and at tram junction Česká, just gently knock on window of the first car in the row. A cheap non-stop taxi service is provided, among others, by the Lidotaxi (link contains the QR code image, phone numbers, and map of stands). Be prepared to pay in Czech Crowns. The weather in Czech is typical central European mild weather. The average morning and afternoon temperature is about 15°C and 25°C, respectively, in the early September.

There are available 900MHz and 1800MHz GSM bands as well as some newer technologies (GPRS, EDGE, UMTS) in the region of Brno city. These are operated by T-Mobile, Vodafone, and Telefonica O2. Public pay phones can also be found. The emergency calls summarized below should be available for free from both pay phones and your personal cell phone (even when you don't have roaming). Note that +420 or 00420 is the international prefix for Czech Republic. The general emergency number, where they also speak English, is 112 - just like in the rest of Europe.

Free Internet access, by means of an open wi-fi connection, is sometimes available in cafés, bars, and restaurants. This is quite common in the city centre and rather occasional in the rest of the city.

There will be Internet connection available using a cable (RJ45 connector) in hotel rooms and using a wi-fi access point in the schooling room or foyer.

The standard current in Czech Republic is 230V AC, max 16A. Sockets are "French Type E" with two holes and one round pin. 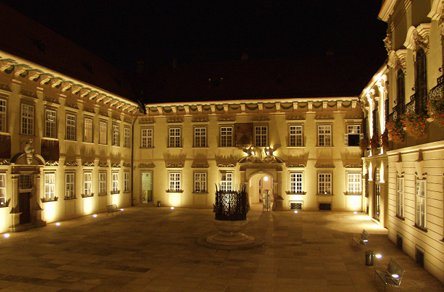